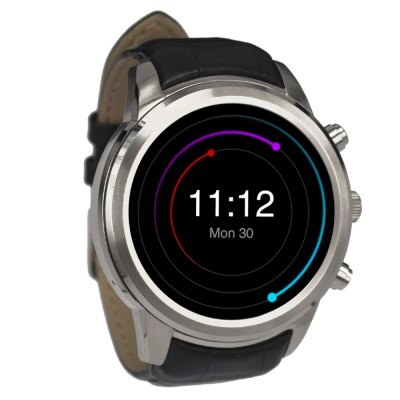 Physical Looks – the Finow X5 3G is one of the best looking watch by Finow, the company made it look like a traditional watch on the outside but advanced smartwatch on the inside. Looking at it you might mistake it as Fossil/Moto 360 or a variant of HUAWEI watch, the body is a circular aluminum alloy and the 1.4 inch bright AMOLED screen display, give it a more classy premium look. The strap can be change to either stainless steel strap or leather either way still it is a nice looking watch. On the side is are buttons with a power button on the center.

Under the Hood – the watch is powered by an MTK6572 dual core 1.2 Ghz processor, its not just known if how the 6572 processor of MediaTek on smartwatch will perform compared to Snapdragon Wear processors, I guess we need to do some a bit of Googling. Set of sensors in the watch includes pedometer, heart rate monitor, and barometer. Other pre-installed app in the watch includes music player, browser, a calendar and some recorder, it has its own apps store to download some additional apps. Well before we forgot, the Finow X5 3G is a watch phone type of smartwatch, meaning it is equipped with a SIM Card GSM+ WCDMA making it able to receive phone calls and messages without the need of a smartphone.