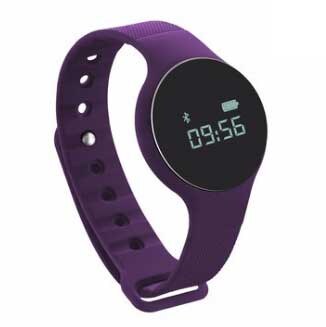 Design – Zeblaze followed the success with the Zeblaze Zeband with a new version of smartband, the Zeblaze Zeband 2, this time it has a different form factor, a different design, instead of a rectangular design, Zeblazed goes with the circular design similar to THL P1 smartband. The smartwatch has a 0.68 OLED inch screen with 128 x 68 pixel resolution, it is a sporty version with a silicon rubber strap, So far its looks good and fashionable, the IP65 waterproof rating makes it ideal for outdoor fitness workout, the smartband is available in Black, Blue and Plum colors.

Under the Hood – Zeblaze did not detailed much on its processor or its inner hardware features  but it will like not that far from the first generation Zeband which has nRF51822 (Cortex M0 16 Mhz) and 256K memory, instead Zeblaze provided a bunch of health and fitness features. The Zeblaze Zeband 2 is a fitness tracker loaded features such as pedometer with calorie consumption, heart rate monitor, sleep monitoring as well as sedentary reminder. Other functions include push notifications, reminder, smart alarm and anti-lost. According to Zeblaze it has a 80 mAh Lithium Polymer Battery with 15 days of standby time.